Today I found a bag of field peas. I’ve never had them before, but they looked like little black-eyed peas. I was told they were just like Crowder peas, but they’re not. What they were was amazing!

My family isn’t big on the beans, about all I can get them to eat are green beans and pork ‘n beans. But I was determined to give it a try. The kids weren’t looking forward to it at all. After a long night of volleyball, everyone asked me, “What’s for supper?” I paused for a moment and a Southern girls dream supper appeared in my head! “The peas that have been in the crock-pot all day, cornbread, corn on the cob and country ham,” I replied. Did I let the turned up noses and looks of despair dampen my spirits? No, but it did make me a little apprehensive, I have to admit.

How did supper turn out? Amazing! My hubby didn’t really know what to expect when he got home and when he walked in and checked out supper, he immediately grabbed a plate and proclaimed, “Man, an old-fashioned supper!”

There is something so soothing about an old-fashioned, southern meal. It comforts the soul and takes you back home. It draws you near and the only way this meal could have been improved would have been with some fried chicken! 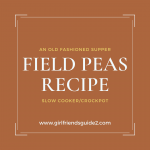